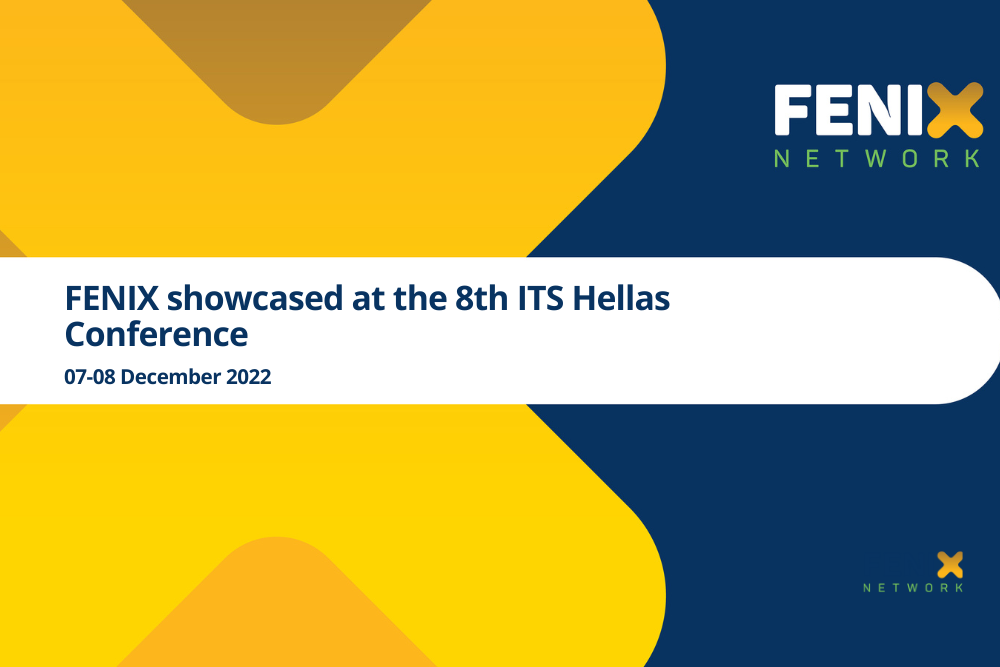 The FENIX project is starting to reap the achievements of the journey made so far and is about to reach its final stop. Nevertheless, the road is still not over and consortium partners are presenting the project’s results in different occasions, events, and meetings. One of them was the special session organised in the framework of the 8th ITS Hellas Conference on December 7 at the Hellenic Ministry of Infrastructure and Transport in Athens.

The conference, organised by ITS Hellas between 7-8 December, focused on the “Research – Remodeling – Innovation” triple scheme. Such paradigm, if operated dynamically, promises a sustainable future for transport services and resilience towards crises.

CERTH/HIT, partner of the FENIX project, prepared a special session to present and discuss the most recent developments of the project and of the Greek pilot site. During the session’s timeslot dedicated to FENIX, Dr. Georgia Ayfantopoulou (CERTH/HIT) and Dr. Angelos Amditis (ICCS) talked about EU priorities and their companies’ initiatives in the transport and logistics sectors. Focused was given to digitisation of the supply chain and the seamless exchange and use of data. The two FENIX partners’ presentations aimed to explain the importance of integrating new technologies in the transport chain.

The conference represented an opportunity to showcase the benefits that digitalisation and FENIX will bring to all the parties involved and how this will enhance national economies. By bringing up the example of the Greek economy – symbolised by the Greek Transport and Logistics Observatory initiative – CERTH/HIT demonstrated which kind of new opportunities the transport sector should expect by ensuring the uptake of FENIX achievements.

The case of the custom clearance procedure at the port of Piraeus, one of the most important ports in Europe, stood out. The point of convergence for the participants was the recognition of the great importance of actively involving many stakeholders from the transport and logistics ecosystem in the process of integration, implementation and utilisation of the results of digitisation.

Co-financed by the Connecting Europe Facility of the European Union.